Long, long after Earth has dried up it may end up locked tidally into facing the Sun on one side and the Cosmic Heatsink on the other, forever. What would such an Earth be like?

…a description of an end-state scenario described by Jeffrey Kargel in 2003 (“New Scientist” article… “Hell on Earth” ), best seen in this graphic… 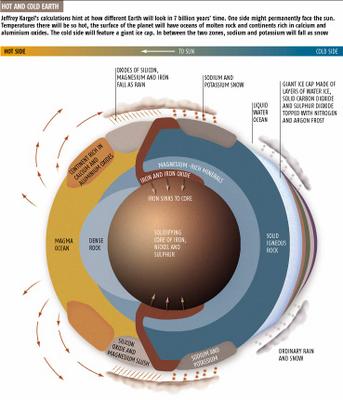 (a larger version can be found here… graphic) Basically one side of the Earth is a magma ocean at 2500 K, while the other is covered in the deepest, coldest night at 33 K. In between is an annular ocean surprisingly of liquid water. An ocean between silicate rain and argon snow. What strange remains might be scavenged from the strata of the Earth that many aeons beyond our day? What would we leave behind?