Dinosaurs and birds were kin, so said Thomas Huxley in the 19th Century. Now a new dino-bird, Anchiornis huxleyi honours his insight and gives us a closer peak at a form between dinosaur and bird… 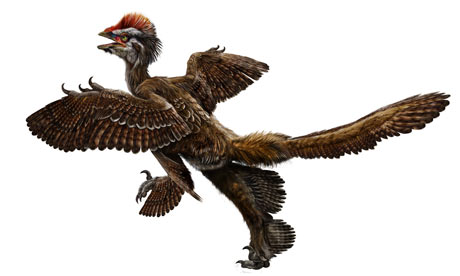 Dating from before that timeless DinoBird Archaeopteryx, this newcomer is closer to dino than bird. Not all dinosaurs were involved in the origin of birds, mind you, since it was a small twig of the Dinosaur Family-Tree which eventually became birds as we know them today. Most big dinosaur groups – the sauropods, the horned dinosaurs (ceratopsians) and various fleet-footed plant eaters (duckbills and iguanodonts) – had diverged from the meat-eating theropods way, way back in the Triassic, long before the dino-birds took to the air. Yet even the ceratopsians are known to have produced feather quills on their tails, so that particular “birdy” aspect had evolved very early indeed. Some lines of evidence hint the dino-birds came from a warm-blooded common ancestor with the crocodilians, who lost a fully divided four-chambered heart as an adaptation to holding their breath on river-bottoms. Only more fossils will tell us what kind of creature became the crocs, dinosaurs and birds – and maybe even the pterosaurs.